I recently wrote an article for Suitcases and Sippycups titled, "Avoiding Utah's National Park Crowds."  In it I shared destinations that would keep travelers away from the crowds of Moab, Bryce, & Zions Canyons.   Since then, the overcrowding in America's National Parks has become a trending topic and is becoming a serious problem, especially here in Utah. 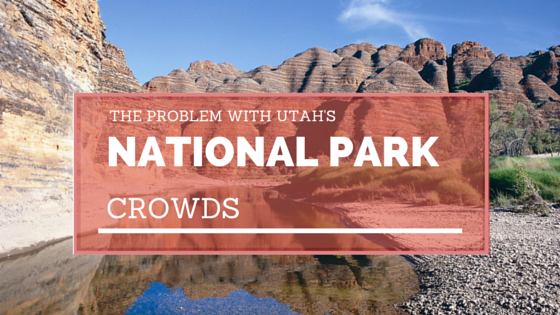 The overcrowding situation became undeniable over Memorial Day weekend, when the Deseret News reported on a temporary closure at the entrance of Arches National Park.  The line of cars waiting to get into the park had backed up and was overflowing miles in both directions on the main highway leading in and out of Moab.  The Utah Highway Patrol deemed the jam of traffic to be unsafe and instructed park officials to close the gates for a time, turning visitors away until the roads were clear and passable again.

Where all the people coming from?  The national park system is not new.  They will celebrate 100 years in 2016.  In Utah, they are flocking in, in large part, due to an over-successful marketing campaign.  Launched in 2013, "The Mighty 5" turned a burning spotlight on the unique and beautiful parks dotted throughout southern Utah.  High Country News has compiled a graph of park attendance that points the finger at a direct correlation between the campaign and an enormous increase in park attendance less than a year later.

And, so, what is the solution?  A proposal to implement a reservations system at the busiest national parks has been met with great resistance in park gateway towns which depend on an abundant tourism business.  Encouraging people to visit their dream parks during less busy times of year would take a complete overhaul of the current American vacation norm-summer is when "we" take time to get out and be with the family.  In deed, it's a problem that on the verge of getting even worse.

2016 is going to be bring more new visitors than ever!  The National Park Service, with some amount of support and funding from the federal government, is gearing up for an epic centennial celebration. "Find Your Park" is a campaign encouraging every American to get out and explore the federal lands near them, to share their favorites, and to find ways to offer support.  In addition, with the start of the 2015-2016 public school year, President Obama's "Every Kid In A Park" program will provide every family of a 4th grader with a free annual parks pass.

The future looks rough for America's national parks, the state parks, and local infrastructures surrounding them.  In my fore thinking article, I included the tips our family lives by for avoiding the tourist crowds.  They included getting an early start to the day, choosing off-the-beaten path hikes and activities instead of front-of-the-park parking areas, and visiting in less-popular times of the year. As the national parks get more and more crowded, those suggestions will only go so far.

So, I ask you, what are your experiences with crowds in popular park locations?  How does your family avoid the hassles that so many Americans are experiencing?  And what is the solution?
Email ThisBlogThis!Share to TwitterShare to FacebookShare to Pinterest
Newer Post Older Post Home