This is a sponsored review via US Family Guide.
I received a product & am now sharing my honest review.

Soccer camp has come and gone and I can't say enough about it!

(Read about why we decided to take a break from hiking and biking and see how P would do in a more structured sport environment).

P's confidence soared during his week of practicing.  He laughed and was happy.  He got to be himself without B hovering over him.  The Challenger Sports program focuses on building skills, but also teamwork, and belief in self all while having fun.  It was a fantastic choice for him and I think will be for your kids, too. 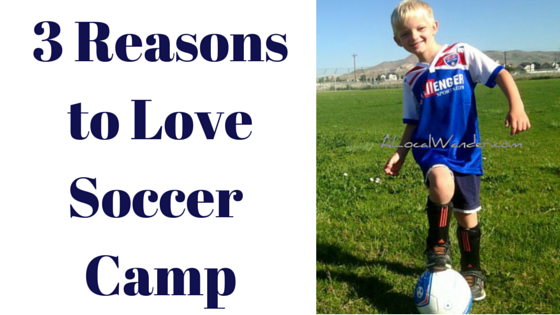 Focus on Relationships
The very first day the coaches had the kids "hugging it out" as they warmed up around the soccer field.  There were lots of high fives. Every activity had an element that involved encouraging or working with the other kids on the team. 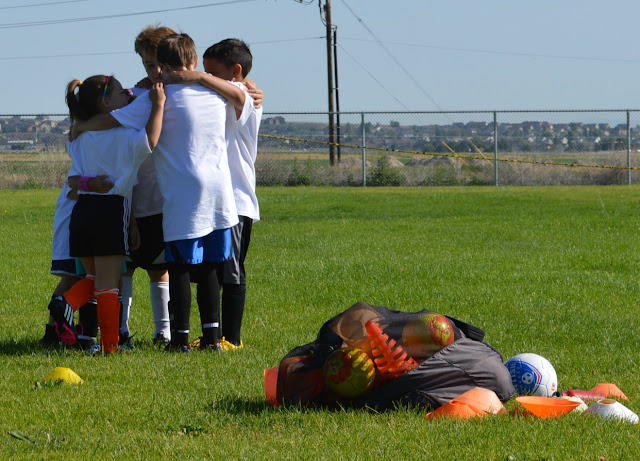 Building Confidence
Remembering that P came to soccer camp with no apparent soccer skills, I was unabashedly surprised to watch him on the 2nd day proudly performing each soccer skill the coach asked him to do.  He was doing them with some finesse and without the look we're used to seeing that says, "Well, someone else can do that better, so I'm not any good."  He ran fast, and then faster when another kid pulled ahead. 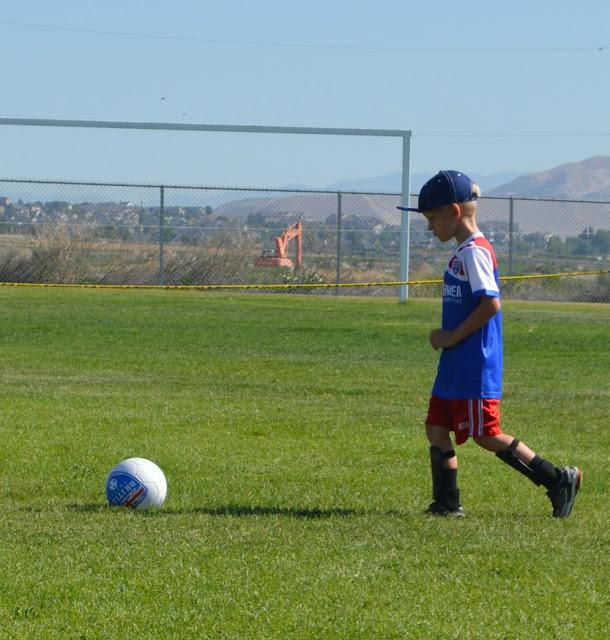 The entire week, P only had one activity he didn't want to try.  It involved balancing a bean bag on his head while kicking the ball, and while beanbags were falling off heads all over the place, he absolutely did not want to try and fail.  I felt sad for him, but watched as the coaches treated him the same as they did in the activities he thrived at-they encouraged him, they showed him how to do it again, but they did not make his refusal to participate into a spectacle.  As soon as the activity was over, he still felt comfortable with them and the other kids and went right back to laughing and trying his best.

In addition to the physical skills, the Challenger Sports program also puts an emphasis on developing a child's inner confidence.  More than once during the week the kids gathered around their coaches and traded turns standing in front of the group and sharing a joke.  It can be a scary thing, but after each joke the kids and coaches all clapped and laughed and shouted praise.  Kids who had stood up timidly, sat down beaming from ear to ear! 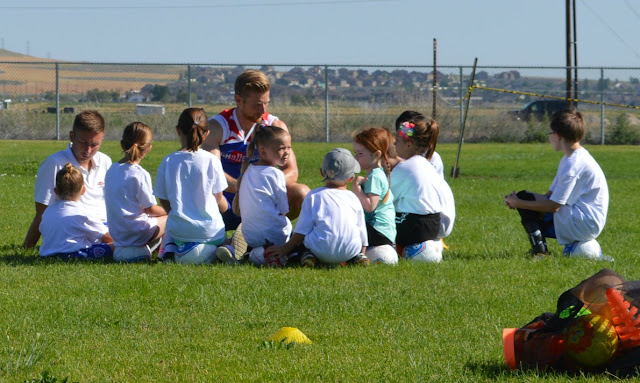 Games, Not Winning
The focus on winning in American youth sports is one of the primary reasons our family has not made organized sports a priority.  We  try to teach our kids the importance of learning skills and developing a love for an activity even when it's not going well.  My biggest pleasure with the Challenger Sports British Soccer Camp is that they never "played a game" of soccer.  Doesn't make sense, does it?  I loved it!

The two camp groups I watched playing each day ranged from 3-6 and 7-10 and they played fun games for an hour and half each day.  The coaches taught them a skill and then implemented it into a relay race or a cone drill or a game of make believe.  One day they were retrieving ice cream cones, the next traveling on world-wide adventures, and the next re-enacting their favorite scenes from Toy Story.  My absolute favorite was a pirate game that involved these 4 elements...

I am sure that as kids get older and advance through the Challenger Sports program, there does become more of a focus on the actual game of soccer.  I, though, could not be more grateful for the emphasis at a young age on skills and having fun.


Learn more about Challenger Sports British Soccer Camps
and
Find a Summer Camp Near You!

Use code USFG16 to get a free water bottle!