Nitro Circus: Should You Go?

This is a sponsored post via US Family Guide.
We received tickets in exchange for our honest review.

"My dad says I can't watch motorcycle and dirtbike videos anymore,
because they will make me want to do crazy things."

If this is what your 5-yr-old nephew tells you as he sits down in his 6th row seat at Nitro Circus, you may need to grab every one's coats and walk right back out the door.  I looked at him seriously for about 2 seconds and started laughing.  Oh, buddy, you have no idea! 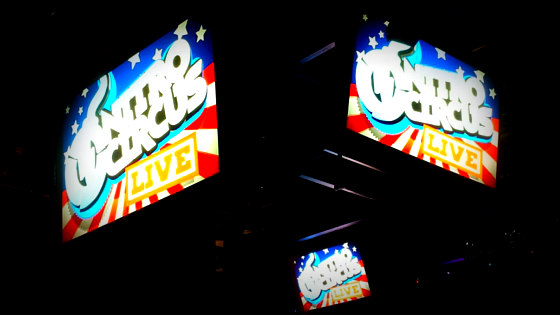 My protective mom brain was conflicted about taking B & P to the Nitro Circus Tour.  On one hand, how could I not be the coolest mom on the planet after surprising them with that?  That would just automatically happen.  On the other hand, extreme sports stars are not the best of role models, in my mind, and putting my boys in a setting to be confused about that is not a decision I would usually make. With those two trains of thought warring in my mind, we sat back and waited for what would happen.

This happened, of course. Boys jumping up and down in their seats the entire time..

The Nitro Circus stunts and tricks had all 4 of us gasping and cheering non-stop for 2 hours.  I honestly could not get enough of watching these boys as their eyes grew wider and wider after each jump. 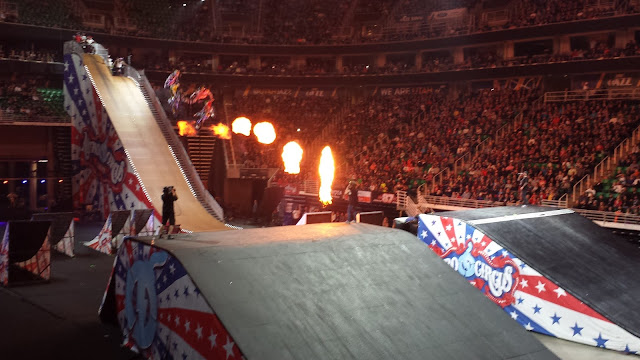 My conflict didn't entirely go away.  If anything, it did become muddled, but my perspective remained clear.  The emcee made a lot of "I'm surrounded by idiots" jokes which B picked up on very quickly.  It was the part of the whole night he has told his dad over and over again.  Addressing the issue of safety which my nephew had brought up himself when we arrived, the emcee did throughout the evening make tongue-in-cheek comments about how it wasn't a good idea to try whatever stunt was about to happen.  I wouldn't say it felt sincere, but rather a way to satisfy the the legal experts while at the same time sticking it to them.

It was undeniable as I watched, though, that there is an extreme amount of athleticism and bravery in what these guys (and girls do).  The tour is sprinkled with videos and pictures letting you know that many of the riders are "family guys", in their interpretation of what that means, and throughout the night there were several times when a difficult stunt was completed flawlessly that the entire team swarmed around a rider with congratulatory high fives in support.  I started to see how even though their lifestyle and their choices would not be mine, they are still a group of people who love each other and want to see success among their friends and colleagues. 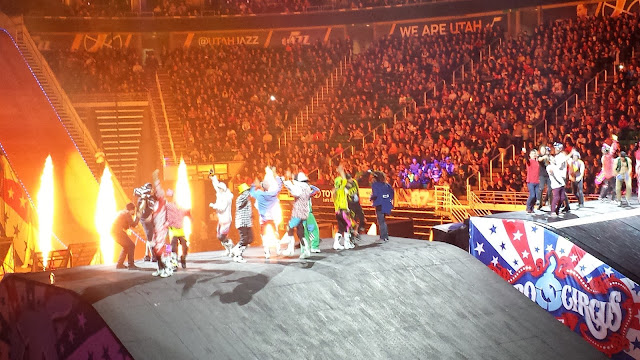 My husband says I make too much of the experience.  He says, "It's motorcycles and flips and fire. It's COOL!"  He's right, of course.  At the end of the day, my boys had an amazing time watch big kids do things they've imagined in their little kid dreams.  It is not the job of Nitro Circus to be upstanding human beings for my boys to exemplify.  It is spectacular show, which showed my boys they can have crazy dreams and work hard to make them come true one day.  But mainly, they just want to see stunts and tricks and Mom will of course take them to see more the next time Nitro Circus comes to town!

Check out tour dates for the 2016 Nitro Circus!
Are they coming to a city near you?

Also, check out the first ever Nitro World Games
which will be right here in Salt Lake City in July 2016!
Buy tickets for as little as $19.
Email ThisBlogThis!Share to TwitterShare to FacebookShare to Pinterest
Newer Post Older Post Home